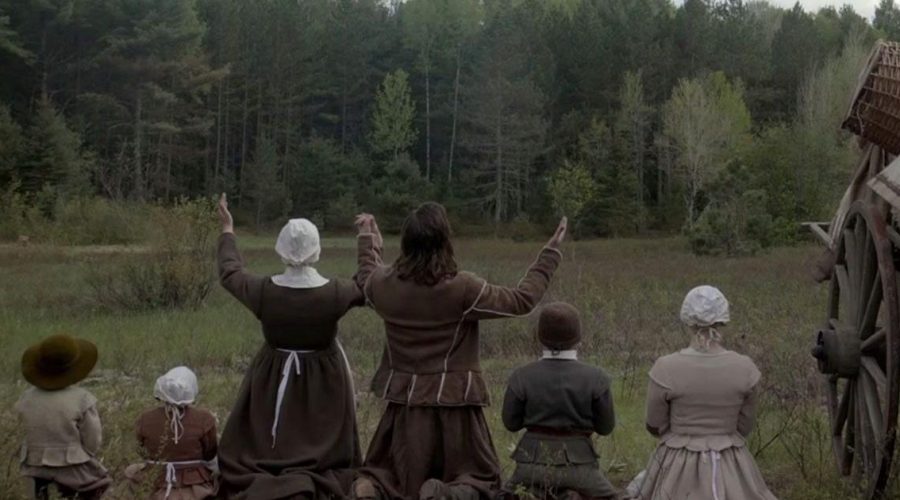 Good for Her: Defining a Trope

(Contains spoilers for Ready or Not, Midsommar, and The Witch)

With genres always evolving, different tropes are constantly defining new decades of cinema. The last decade or so has seen many new approaches to well known archetypes and plot devices, and especially in the age of social media, more and more people are becoming able to voice their film opinions online. Inevitably, this has led to the use of memes not only for jokes, but also to describe subgenres of film.

“Good for Her” began as a quote from actress Jessica Walter on the show Arrested Development, which was turned into a gif that has become a popular response on social media sites. The original scene consists of an offscreen voice that says, “Claiming she could take it no more, the young mother released the emergency brake, allowing her car to roll backwards into the nearby lake,” (Arrested Development) to which Walter’s character replies, “Good for her!” The gif is used in countless contexts, but recently and predominantly in reference to women of horror or thriller movies. “Good for her” is not only the name of at least two hundred letterboxd lists, but it has also grown into its own subgenre of films.

But since the growing popularity of the phrase, there has been constant disagreements on social media over what technically qualifies a film for the phrase. Is “good for her” just a joke taken out of context, or a serious display of how viewers can misinterpret a film’s central themes? Ready or Not, Knives Out, and The Invisible Man, are some of the most common examples of “good for her” films, but many feel that the inclusion of movies like Gone Girl, Midsommar, and The Witch, where the female lead makes increasingly morally gray decisions as the film progresses, go against the basic meaning of “good for her.”

Ready or Not is one of the more widely accepted “good for her” examples. The film’s lead bravely and consistently defends herself against attackers and ends the film victorious against her enemies. With only a small portion of any of the bloodshed her own personal doing, and all of it done in self defense, she gets revenge against her lying husband by surviving his family’s attacks which in turn triggers the curse that kills them instantly. This leaves the protagonist as a virtually completely innocent victor that the audience can happily root for.

A “good for her” example that is less widely accepted is the popular horror film Midsommar. Depending on your perspective the movie may seem like an odd contender for the trope, considering the movie ends with the female lead joining an evil cult that’s responsible for her friends’ horrific deaths; but others defend protagonist Dani’s placement amongst the other “good for her” leads. She ends the film as May queen. She’s finally able to express her emotions in a cathartic way after the death of her family. She gets “revenge” on her abusive boyfriend by allowing the cult to sacrifice him. With these factors, one could argue that Dani ends the film in a more powerful position than she starts. Though she is no longer our morally pure protagonist, Dani outlives her emotionally abusive ex-boyfriend and finds a new family in her fellow cult members.

The Witch is another intriguing example of this. At the film’s end, lead Thomasin becomes a part of the evil she was threatened by in the beginning; the evil she was wrongly accused of being involved with the entire time- but in doing this she escapes her controlling and abusive family. Obviously, nothing about her dead family is “good” no matter the circumstances, but one could argue that Thomasin’s joining of the coven shows her finally escaping the unhappiness and persecution that she felt before. After all that’s happened, Thomasin ends the film not only free from further judgement or accusations, but able to live “deliciously” and presumably go on to join the other witches in torturing settler families. Though this makes her a villain and shows that Thomasin has lost her original morality, this wouldn’t necessarily disqualify her from “good for her” status in the eyes of many horror fans who enjoy and appreciate more morally gray characters.

Horror in particular is a genre known for its villains. Characters like Freddy Krueger, Michael Myers, and Jason Voorhees are praised as the stars of slasher movies without much need to discuss the objective despicableness of their actions. No one has to specify that their appreciation of those characters are in purely a fictional way; we all know that slaughtering camp counselors and babysitters is something not meant to extend into real life. But does this same idea apply to the cult of Midsommar, the coven of The Witch? Or are Dani and Thomasin excluded from “good for her” because we must specify that evil cults are, of course, bad and not exhibitors of behavior that should be emulated in real life/

Is there a difference between appreciating the brutal work of Mr. Krueger, and feeling satisfied that a woman has survived deadly circumstances and ended the movie more powerful than they’d ever been? Are these characters critiqued differently because they’re women, or because they begin the story as morally pure protagonists?

Is “good for her” literal, and meant to only be used in morally black and white situations? These questions all come back to what you think “good for her” means, and whether or not you know that the context of the original quote is in reference to a woman driving into a lake.